Eat Insects Detroit was the first conference in North America solely dedicated to edible insects. It was held at Wayne State University from May 20-28, 2016.

Improving consumer perception is a huge area of focus.

Only about 30% of the people polled in North America were willing to try edible insects. I took away 2 main hurdles.

Consumer perception is that insects are not safe to eat. They largely associate insect with pests. The general public is not aware of how insect are farmed, processed and used as food. The lack of knowledge leads to the consumers feeling that the products are unsafe. They also don’t know that humans have been eating insects for thousands of years. How can this obstacle be address? Little Herds and educational groups are doing a great job educating people about the benefits of eating insects. A key message for consumers is that insects are just like any other food we eat.

The other hurdle I would like to mention is taste. One study (I don’t believe it is published yet) reported that people did not want to eat insect because they taste bad, even though they never have tried them. Insects do have their own unique flavor that people may be unaccustomed to. Who can people trust? Chefs are a great resource for the industry. People would be relatively more comfortable eating insects at a local restaurant that they have been at before and enjoyed their food. Chefs know how to make food taste great. Startups should get chefs involved with their product development to ensure the flavors are balanced and have just the right amount of seasoning.  The #1 deciding factor for why people choose what to eat is taste. If it doesn’t taste delicious, people won’t want to eat it.

Special thanks to ‘The Bug Chef’ David George Gordon for years of excellent work with edible insects.

‘Insect Cuisine’ as an alternative to ‘Edible Insects‘ was presented by Kiah Brasch. “‘Edible insect’ sounds like they are just barley acceptable as food”. I think ‘insect cuisine’ is great for consumer facing communications. #InsectCuisine!

Featured speaker, Ricardo Carvajal, provided an overview of the regulatory frame work in the US. He had a post on his blog from 2013 that really jumped out at the industry. Move Over, Cricket! Lickets: Edible Insects are On the March

His advice was to work with in the current regulatory frame work. More regulations are not needed and should not be wanted.

Ricardo referenced the definition for food from the Food Drug and Cosmetic Act (Title 21 sec. 321(f))

The must be a “reasonable certainty of no harm” according to Ricardo. I searched the Food Drug and Cosmetic Act and did not find this phrase. What it does relate to is the definition for adulterated food in sec. 402.

My assessment is that the phrase “reasonable certainty of no harm” is a succinct interpretation of the law.

I felt a collective sigh of relief from the attendee’s after the presentation. There was a general consensus that we don’t need edible insect specific regulations in the US.

I was signed up as a vendor with Incredible Foods! It was a lot of fun having a booth at the expo. I received a lot of positive feedback on Sal de Cricket. The concept was well liked and everyone loved the flavor. I had samples of seasoned beer cup and also on tortilla chips.

Thank you every one who organized, presented and attended. It was really great meeting everyone. 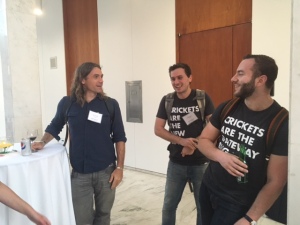